Why have a door in a garden?"

Follow Cooper as he discovers the garden’s many doors and the hidden wonders behind them.

The Garden’s Secrets is set in the award-winning Hamilton Gardens, on the banks of the Waikato River in Hamilton, New Zealand. There are many doors within the garden and not even the staff know where some of them lead.

How I wrote the book

Deborah Hinde, the book’s illustrator, and I were lucky to get commission to write The Garden’s Secrets. The people at Hamilton Gardens wanted a book written about their beautiful gardens and they asked us!

It was such a fabulous project to work on. I love the gardens, and Deb and I got to spent many happy hours wandering around them, thinking up story ideas.

Hamilton Gardens is full of doors. Some of them open for the public and some them don’t. Some are as small as a pencil, and some are taller than a house. There’s even a door in a tree!

The people at the gardens gave us a list of 13 doors that had to appear in the book. But there are many more in Deb’s pictures. The challenge is to find them all. But don’t worry. There’s a map at the end of the book.

Enjoy! Because in a garden, every path, every door leads somewhere ... 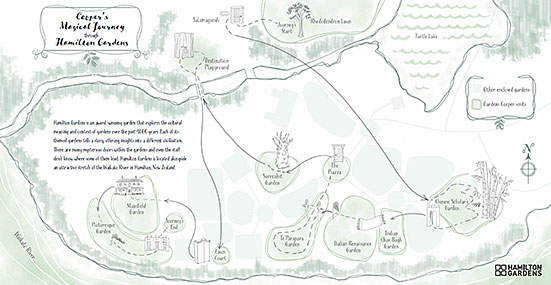 Who knew that NZ has its own Secret Garden? Not only one but multiple gardens joined by intriguing doors, big and small.

This gorgeous hardback is a celebration of the award winning Hamilton Gardens on the banks of the Waikato River in Hamilton NZ. The text is lyrical, fun and sometimes mysterious. As a young boy ventures through a strange door, the garden itself answers his many questions, opening his eyes and imagination to the wonders surrounding him.

The illustrations take the reader inside the garden with Cooper, portraying different garden styles and times over thousands of years. His curiosity draws him through more doors to discover their secrets. A map of Hamilton Gardens in the rear of the book shows even more possibilities for awe and appreciation – Cooper has only found a third of what’s waiting for visitors!

A botanical time-travel adventure paired with the marvels nature gives us.

– Adele Broadbent of What Book Next?

This is a beautiful book - almost as beautiful as the gardens themselves. Deborah Hinde's illustrations of the different gardens will be instantly recognisable to anyone who has been there and the cute creatures will appeal to the young audience this book is written for. Even children who are too young to sit still for the story will enjoy looking through this book and discovering the different creatures on each page. This book is well-designed, skillfully executed and beautifully produced.

While The Garden's Secrets would make a beautiful gift for any child particularly interested in gardening, it will probably appeal most to children who have been to the Hamilton Gardens. It would also be good to read to children prior to a visit. There is a map of Cooper's journey at the back so families can re-trace his steps if they wish. 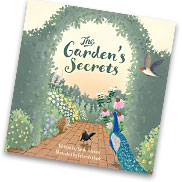 The Garden's Secrets sales and trade information download the PDF.