Gorgon's heart was heavy as he trudged back down Meringue Hill. He'd wanted to ask Mina Cucina to marry him; more than anything, he'd wanted to do it. Yet he hadn't.

Spaghetti Giraffe sighed. “At this rate, Gorgon will never be brave enough to ask. We must help him find the courage he needs.”

Can courage be grown? Spaghetti Giraffe and the under-cooker animals are on a quest to find out.

But first, they must leave the safety of Mina Cucina's kitchen.

The first book, The Spaghetti Giraffe, received a Storylines Notable Book Award in 2018.

How I wrote the book

It's been like that for me with the Spaghetti Giraffe. Everywhere I go, he and his mischievous friends keep sticking their heads up, and saying: Hey, Sarah! What about this? We could do this! We could go there!

Even after the first book was finished, ideas for further adventures with the under-cooker animals kept arriving, so I knew I had to write more.

This is the second book, and is about what happens when the under-cooker animals decide they need to leave Mina Cucina's kitchen for the first time. If they are brave enough, that is! You'll find all your old friends in here, and some new animals too.


Print out the sheet, then colour, cut and pin it to make a moveable model of the Spaghetti Giraffe. There are also some great colouring-in pages, taken from the books, for you to print out and enjoy.

Read the start of Spaghetti Giraffe and the Egg of Courage

Read the first two chapters of Spaghetti Giraffe and the Egg of Courage, in PDF format.

This magical story is like reading a beloved fairy tale. There is a wicked older woman, a confident rich man, a kind but cowardly character and magical beings afoot. Fairy tale vibe or not, there is a definite modern theme of kindness to others, being true to yourself, and empowerment of women.
With adorable black and white illustrations sprinkled throughout, this kiwi tale and will make a fantastic read-aloud for Year 2-4 (age 6-8).

Have you ever wondered what happens to the dribs and drabs of food that inadvertently get lost during cooking? Those splashes of sauce and dropped pasta that slink into those hard to reach places? Author Sarah Johnson has done the imagining for us, in this utterly charming, junior novel...
This is the sequel to The Spaghetti Giraffe, which first introduced the food scrap animals. While the sequel can be read as a stand-alone, the magic of the books deserve a full serving...
Black and white illustrations by well-known kiwi artist Deborah Hinde (Moo and Moo and The Little Calf Too, and Hare being just two of her books) add to the charm. She brings Johnson's story to life with her whimsical sketches.
The book features short chapters and would make a wonderful introduction to novels for younger readers. While the book may be aimed at junior readers, Johnson doesn't talk down to them. Her prose is poetic and serve as an inspiration and teaching point for those beginning to dip their feet into reading and writing. One such sentence appears just pages into the book, heralding what you can expect throughout; "Icicles dripped and plinked in passing gusts of frosty wind. Small birds huddled, and large ones circled, their shadows sliding like dark sighs over the cold white world below".
It's also makes for a fabulous read-aloud, instantly capturing the attention of my new entrant school-aged children. The idea of animals lurking in the kitchen opened up their own imaginations and inspired them to create their own comics about what could be found under our oven.
Spaghetti Giraffe and the Egg of Courage is a wonderful, magical read with a lot of heart. I can't wait to read the next adventure. 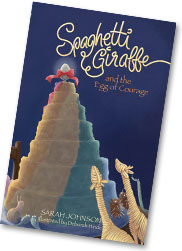 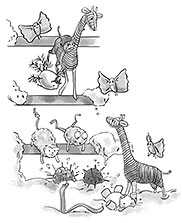 The Spaghetti Giraffe and the Egg of Courage sales and trade information download the PDF. 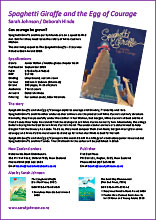